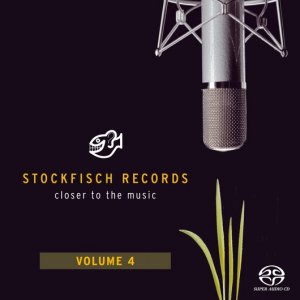 
Stockfisch Records never fails to produce winners and even their compilation discs all seem to have a cohesiveness that is often not even found in "concept albums". Closer to the music, Volume 4 allows one to experience various artists at their very best. Then again, sampler discs often contain only tasters of what is to be found on the original artists full album. If the tasters are this good, imagine the full product!

"I fell in awe in front of the swift charms of this compilation, a collection of highly enjoyable pearls from the Stockfisch catalogue. The artistic excellence and the stupefying tonal quality of the ensemble will make it a gourmet´s choice for any soundsystem ..." There were so many positive and even enthusiastic feedbacks on our "Closer to the Music" compilations Volumes 1 to 3, that we decided to release Vol.4 in 2011.

And again this 4th compilation offers both a selection from current releases and presentations of artists and albums from future Stockfisch releases.

Belonging to these forecasts you can hear two tracks from the upcoming Paul Stephenson album, who already had recorded two CDs for Stockfisch. Furthermore one song by Zebra Sommerwind, the trio around Fiedelmichel-doyen Thomas Kagermann, featuring German (folk-)songs in contemporary arrangements. Also Stockfisch is pleased to present the German singer Katja Werker with her version of the "Karat" classic "Über sieben Brücken musst du gehen", one of twelve songs she recorded for her upcoming CD. A Stockfisch fellow guitarist from the early years flew over from the US to visit Northeim, Ralf Illenberger (formerly playing with Martin Kolbe). He recorded his solo guitar album with Günter Pauler to be released in 2011.

"Closer to the Music Volume 4" offers more than 73 minutes of musical highlights to get in first touch with Stockfisch artists as well as sound and/or just for enjoyable listening.