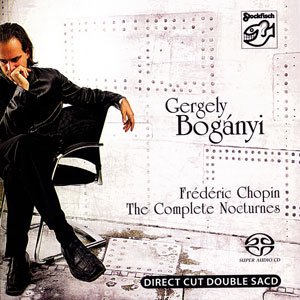 
Gergely Bogányi has become one of the most sought-after and cherished pianists of his generation. His brilliant technique, coupled with a deeply expressed, artistic interpretation has made him an outstanding international performer. Born in Vác into a family of musicians, Gergely Bogányi began playing the piano at the age of four. He continued his studies at the Liszt Academy in Budapest with Zsuzsa Esztó and László Baranyay. He also studied at the Sibelius Academy in Helsinki with Professor Matti Raekallio, and at the University of Indiana in Bloomington with Professor György Sebök. He participated in several master classes of Annie Fischer and Ferenc Rados. Among his professors he cordially remembers Annie Fischer who made a deep impression upon his art. She instructed him regularly and was a cherished mentor until her death.

From a young age, Gergely Bogányi has had success in several national and international competitions. He won a prize at the national piano competition in Nyiregyháza at the age of six, and three years later he won top prize at the same competition. Other early competitions include the third prize in Ettlingen, Germany in 1990 and the second prize in Epinal, France in 1991, where he was the youngest competitor. In Helsinki he was a three-time winner of the Finnish Radio “Helmi Vesa Competition.” He won first prizes in both the Chopin and the Mozart competitions in Budapest in 1993, and Indiana University’s music competition in 1994. In 1996 he earned the Gold Medal at the “International Franz Liszt Competition” in Budapest, one of the most distinguished competitions in the world.

Gergely Bogányi is a constant guest for recitals in the best halls in Europe and worldwide, and is invited to perform as a soloist by the best orchestras in the world, for example the London Philharmonics in 2004. He is regularly making radio, TV and CD recordings and giving master classes. Besides the complete Chopin oeuvre and a wide repertoire of solo pieces (for example Bach, Mozart, Beethoven, Brahms, Schumann, Liszt, Bartok), there are more than 30 piano concertos on his extremely broad repertoire. In the autumn of 2001 his series of "Chopin's complete piano works" received the Hungarian Gramofon Prize in the category of "Best concert event and performing artist in Hungary".


[ Format: 2SACD with CD layer, playable on any CD player ]