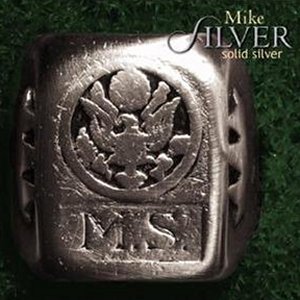 
Music that goes to the heart, because it comes from the heart: with "Solid Silver", the fabulous English songwriter Mike Silver has presented his listeners with a disarmingly personal and heart-warming ballad album. His tender, yet powerful vocals create an intimate and peaceful atmosphere that leaves the listener floating.

In his "lullabies for grown-ups", Mike sings about how easy it is to lose your heart, or your mind, and how difficult it is to say goodbye. These are songs of love and separation, homesickness and homecoming – much of the material is autobiographic. Mike is not afraid to stand up and be counted as one of the last romantics, which makes his music all the more fascinating. Through some mysterious alchemy, he turns emotion into music, while managing to avoid the usual clichés.

The instrumentation on "Solid Silver" is both sparing and atmospheric – hearing the CD for the hundredth time, the listener will still discover something new. The Danish pedal-steel ace Nils Tuxen creates subtle colours and contours far removed from what one would normally expect from this much-maligned instrument. Beo Brockhausen, the "man of a thousand instruments", maneuvers effortlessly between soprano sax and tin whistle, accordion gives way to snowflake-like tones from the Finnish kantele and the magical tone of the sarod and sitar appear in a whole new light.

However, the centerpiece of the CD is the voice of Mike Silver, which combines with the bright and bell-like sound of his steel-string guitar to create a tone that underscores the CD title "Solid Silver".

Mike Silver is one of England’s best songwriters. He wrote his first song in 1968 and recorded his first album a year later – he has released 15 solo albums altogether. In addition to his talents as a singer and songwriter, Mike is also a gifted producer and has been the guiding hand on albums from Jon Strong, Harvey Andrews, Fiona Simpson and (as co-producer) Allan Taylor. (It is interesting to note that Mike Silver and Chris Jones first got to know each other during the recording of Jon Strong's album "Night Shift" in 1979.)

Mike’s association with Stockfisch goes all the way back to 1976, with the release of the classic album "Come and be my Lady" and his brilliant backing vocals can be heard on David Munyon's "Poet Wind" and Paul Stephenson’s "Light Green Ball"!