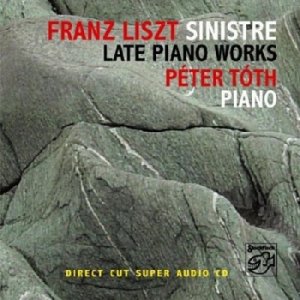 
Another Direct-Cut Super Audio CD from Stockfisch: an SACD documenting the second session of piano recordings at CREAR, Argyll, Scotland.

Peter Toth was born in 1983 in Bekescsaba (Hungary). In 1997, three years after he had first touched a piano key, Peter Toth won the first prize at the international piano competition of the music conservatory in Wittenberg, Germany. Because of this he was accepted in the class for gifted children of the Franz Liszt Music Academy in the same year.

During his studies he has had several opportunities to gather experience on the international concert stage. Among others he has given concerts in the Konzertgebouw in Amsterdam, in the Tchaikovsky Music Conservatory in Moscow, in France, Austria, Japan, in the Czech Republic, in Belgium and in Germany.

Peter Toth is considered one of the most promising music talents in Hungary. In 2005 he made his debut in Munich with a solo concert in the series "Piano Concerts in the Royal Residence" with resounding success. The "Suddeutsche Zeitung" wrote of his performance: "It is enormous, what this young Hungarian pianist is capable of...a clever, plausible music with all the potential to grow and to mingle with the very best."

On the Super Audio CD (SACD) the sound is recorded in DSD (Direct Stream Digital) format. The sampling frequency (2.8224 MHz) is 64 times that of a traditional CD. Furthermore, DSD uses 1-bit quantization. With the aid of this technology an even broader frequency range (up to 100 kHz) and even greater dynamics (120 dB) can be achieved over the entire useful audio range.

Until now it was practically impossible to maintain the DSD format throughout the entire edit/mix/mastering sequence during production. This was because no system is yet available which permitted the necessary processing in the 1-bit format after a DSD recording. This meant that the unavoidable editing procedures such as gain leveling, mixing, cross-fades or even additional EQing or dynamics processing could be achieved only by downconverting to PCM format (i.e. the Pulse Code Modulation format of the traditional CD).

We first used our SADiE DSD8 system for the recording, processing and mastering of this DIRECT-CUT-SUPER-AUDIO-CD – which enabled us to forget about the limitations that had beset us to date: a brand-new system from the tradition-steeped British manufacturer of mastering equipment that allows simultaneous recording of 8 channels. The analogue signal from the microphone is converted at the input to DSD and is also maintained in DSD-Wide format with 2,8224 MHz throughout the processing stages already mentioned. The end result is then obtained in the SADiE DSD8 – the "cutting master" (AIT tape) – which is then transferred directly to an SACD glass master in the pressing plant.

This DIRECT-CUT-SUPER-AUDIO-CD will enable you to hear a 5.1 DSD surround mix as well as a DSD stereo mix on the SACD layer, and the 16-bit PCM stereo program on the hybrid layer which guarantees downward compatibility. So this gives you the first ever opportunity of comparing a real(!) DSD recording with the conventional CD format.

[ Product availability: Out of Stock available for order ]